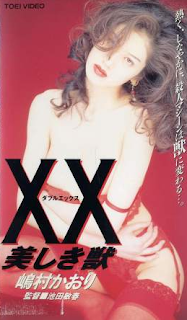 Bordering on a "pinku-eiga" film, Toshiharu Ikeda's "Beautiful Beast" certainly qualifies full entry into the genre if you were to only regard its general overview: in the course of seeking to kill the yakuza leaders responsible for her younger sister's death, a beautiful woman with a gun will encounter - while naked - much pleasure and pain along the way. A clue as to why it doesn't fit the style can be found in the film's full title "XX Beautiful Beast" - not quite willing to go to the full extent of a triple X, it still wants to make you think it will titillate and walk some dangerous ground. What it ends up being is a low rent, soft core attempt at exploitation that, in its unwillingness to go very far with either sex or violence, becomes the worst form of exploitation - not only does it not have a point, it fails to even entertain.

While that is perhaps a bit of a harsh assessment (and certainly doesn't take into account some of Ikeda's directorial flair), perhaps two examples can help explain. The first is an early sex scene between our heroine Ran (also known as The Black Orchid) and Fujinami. She's just assassinated the head of one of the yakuza families and is escaping the throngs of baddies chasing her. He finds her just outside his bar injured and bracing herself for the onslaught. He shelters her, nurses her wound and covers for her when they come knocking on his door. In thanks, she offers herself to him in a rather direct manner by stating (while moving his hand down between her legs) "I feel so hot". What follows is a dull, soft focus, slow motion 5 minute love scene (with the requisite cheesy music) filled with Ran's moaning but never allowing her a grand finale climax. It's meant to set up the relationship between the two of them and kick off the big conflict of the film - does Fujinami side with her or should he show loyalty to his former yakuza buddies. Though it does establishes all of that somewhat, it does so without building any foundation for their relationship and therefore leaves you with no feeling as to where Fujinami's allegiance will fall. 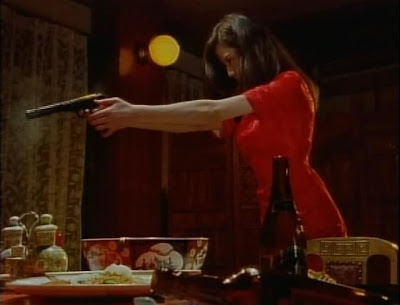 Another example is a torture scene later in the film. Ran has been captured by one of the remaining yakuza leaders and her naked body has been strung up by her wrists over water. While she is bathed in more of that soft focus, bright lighting, he whips her and then begins a form of acupuncture - emphasis on "puncture" - with a sharp metal object. Though she grimaces throughout, there is little blood, no tension and not a great deal of fear for the character. In fact, the lead up to the scene is poorly handled in that it seems that she simply turns herself over to him because he is threatening to kill Fujinami. It dilutes her strength and resolve while providing nothing more than an opportunity to show Ran's naked body in a submissive state. To be fair, she does turn the tables, but in a wholly contrived and silly way that could not have been planned out. And once again, it's all rather dull - in execution as well as from a story perspective.

The Black Orchid is half-Japanese and half-Chinese, but the yakuza only speak of her as Chinese. Unfortunately, the story never makes any further use of this particular aspect of Ran's heritage and that's a shame because there is little else to define her character. Short of her grimacing during sex or torture, she's mostly expressionless and with little of interest to say outside the sad tale of her sister. Instead of making her quietly determined, she's simply not very interesting. Fujinami is probably the most fleshed out character in the story since he's given more time to show emotion, reflect on his past experiences and wrestle internally with his choice between Ran and his loyal longtime yakuza friend. Given the machinations of the plot, though, there is never a tense moment on screen where he has to face that decision. It's either made for him or he makes it so fast as to remove any of the struggle he has faced considering how to handle things. It leaves the story and film rather limp, which is probably the worst thing you can say about an exploitation film.

Read more from Bob Turnbull at his blog.
Posted by Chris MaGee at 10:06 PM