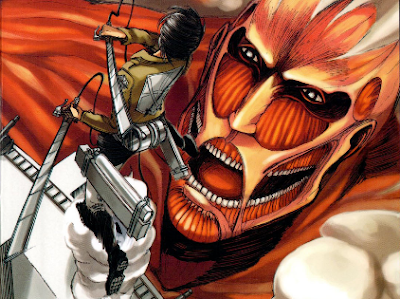 With his 2010 film "Confessions" it looked like director Tetsuya Nakashima was making moves away from over-the-top fare such as "Kamikaze Girls" and "Paco and the Magical Picture Book" and towards serious drama... or at least that's what we thought. Now news comes via Anime News Network that Nakashima is working on a film that is truly larger than life.

According to the post the official website for Itako City in Ibaraki Prefecture put out an open call for 80 extras, "healthy male and female [...] to play people fleeing in panic from 'giants' who suddenly appear in a peaceful shopping district." This call for extras is connected to Nakashima's live-action adaptation of Hajime Isayama's manga "Shingeki no Kyojin (Attack of the Giants)". This project was verified by an e-newsletter from Kodansha's Comic Plus magazine to their subscribers. Apparently Nakashima's "Shingeki no Kyojin " will be hitting Japanese theatres in the fall of 2013.

Hajime Isayama's original manga (image above) debuted in the pages of Kodansha's Bessatsu Shōnen Magazine in 2009. It takes place in a future world in which humans have built huge walls to keep out a race of man-eating giants. The question is do these walls protect the human race or have they imprisoned them? Given that Nakashima has been known to go grandiose with the style and emotional content of his films this project makes a whole lot of sense. More on this as it comes out.
Posted by Chris MaGee at 5:52 PM