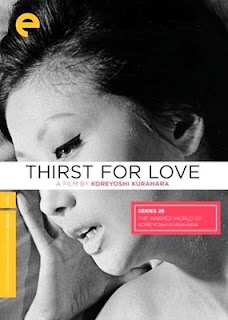 You're not even a minute into "Thirst For Love" when your senses have been jarred. As a woman pauses while shaving an elderly man, we suddenly catch flashes of a chicken thrashing in (one can only guess) its last dying gasps while its sharp piercing squawks fill the soundtrack. Those images and sounds quickly convey some important information: the woman with the blade in her hands is not in a good headspace and she likely has some issues with that old man. It also signifies that director Koreyoshi Kurahara is going to tell his story with more than just conventional narrative techniques. It turns out they were quite unconventional since Nikkatsu delayed the film's release because they felt it was too "arty". In the same year that Seijun Suzuki got fired from Nikkatsu for delivering "Branded To Kill", Kurahara decided to quit the studio over their decision.

Call it arty if you want, but I call it effective. Rapid cuts, long takes, a restless camera, freeze frames, still photos and daydreams all combine with the layered sound field (and occasionally no sound at all) to tell us the story of Etsuko - the woman in question above. She is the daughter-in-law of wealthy Sugimoto (the old man) and lives in his rather crowded household. He counts ten people in the house: himself, Etsuko, his son Kensuke and his wife, his divorced daughter Asako and her two children as well as the two servants. If you're paying attention you'll notice the sum only comes to nine - Etsuko's husband (Sugimoto's youngest son) has passed away, but it appears that his father still counts him in the family and that there remains a seat for him at the family dinner table. This despite the fact that Etsuko has become his mistress. Apart from the servant Saburo, the old man has little use for the rest of the household and considers them all to be lazy and leeching off his good will. 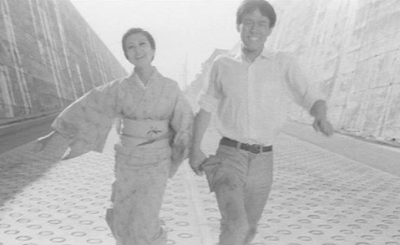 While the rest of the family don't seem to want to let go (Kensuke admits freely that he and his wife love their carefree loafing existence), Etsuko appears to feel somewhat trapped. Her marriage was initially wonderful, but then she learned the truth about the man she married - the first flashback shows still photos of a fun-loving, mischievous and very happy couple, but the second flashback (telling its story through the same technique of multiple still photos) shows a cheating, self-satisfied scoundrel who couldn't care less about her feelings. The remaining male members of the family - her father-in-law (though she has become his mistress, she still insists on calling him "father") and Kensuke - are both quite smitten with her, but offer nothing more than their desire. None of the men in this family seem to have the ability to truly love her. Etsuko's attentions, however, are firmly on the young and strong Saburo.

The film is filled with close-ups of Etsuko - staring at Saburo's sweaty neck or his glistening back or just lost in a daydream of the two of them skipping along the road to Osaka in a heavenly white glow - and she appears to be a tightly coiled spring ready to unravel. She's constantly noticing physical ways of leaving - that road to Osaka, a helicopter, the train, etc. - but they simply aren't available to her. So she focuses on Saburo and her own desires increase to the breaking point. Her torment isn't reserved just for herself, though, and as the dynamics change within the family, she ensures she doesn't remain alone in that state. Ruriko Asaoko (star of his earlier "I Hate But Love") uses her big eyes to wonderful effect throughout the film - though her physical actions don't always show what she is thinking, her eyes give away every lustful thought and every internal struggle. Based on Yukio Mishima's novel, the film keeps the viewer unsettled with its sudden bursts of sound and has a willingness to do whatever it takes to pull you into how Etsuko feels. Meanwhile it doesn't skimp on pulling in side issues like class distinctions and the impotence of the rich while also providing some gorgeous imagery and precise framing of its characters. The Eclipse boxed set "The Warped World of Koreyoshi Kurahara" has been quite the revelation and you couldn't have picked a better way to close it off.
Posted by Chris MaGee at 8:02 PM