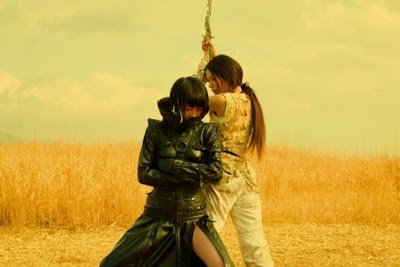 I gasped (I really did) when I saw this story posted at Twitch. I'd been searching around online for any kind of image of Mamoru Oshii's "Assault Girl 2" starring Rinko Kikuchi and Yoko Fujita since news broke at end of August that the two actresses would be battling out for the legendary anime director in his live action contribution to the omnibus film "Kiru = Kill". The film will have not only have this momentous battle sequence, but three other directed by Kenta Fukasaku (Yo-yo Girl Cop. X-Cross), Takanori Tsujimoto and Makoto Tahara that will act as climaxes to non-existent action films. I guess this project's taking a page from Robert Rodriguez and Quentin Taratino's "Grindhouse" with its fictional trailers for B-movies, but it also reminds me of Ryuhei Kitanura and Tsutsumi Yukihiko's Duels Project (2LDK and Aragami) with its two people and one locale battle-to-the-death concept.

We definitely have to thank the sharp eyes of Brian Ruh and Todd Brown at Twitch for snagging this scoop. Check out the official website for "Kiru = Kill" here to tide you over until the film's December release in Japanese theatres.
Posted by Chris MaGee at 5:19 PM