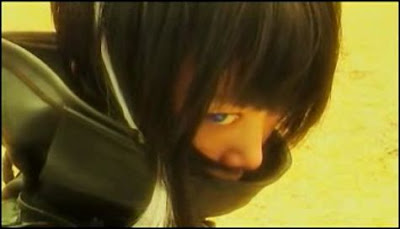 Todd Brown and Twitch have become the go to guys for information on the upcoming omnibus film "Kiru = Kill". The film which is made up of four fight sequences for four different imagined films is garnering real buzz not only at Twitch but across the net. The main reason for this is that one of those contributions "Assault Girl 2" starring Rinko Kikuchi and Yoko Fujita is directed by "Ghost in the Shell" and "The Sky Crawlers" creator Mamoru Oshii.

The first image of Kikuchi and Fujita battling it out leaked last month and now Todd has got the full trailer for the project set to be released in Japan in December.

Now, Japanese films will never have the kind of budgets that Hollywood films do and that definitely doesn't bother me, but I have to be honest that this trailer left me a little underwhelmed. There's a lot you can do on a small budget, but this looked cheap. Don't let me spoil your fun, though. Check it out for yourself here and then tell me I'm full of crap if you don't agree with me.
Posted by Chris MaGee at 9:00 AM