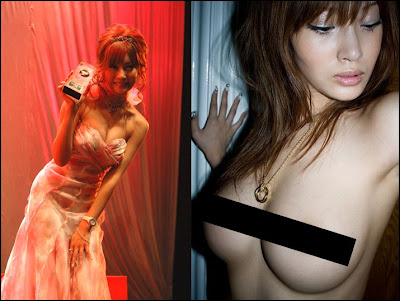 Here's some news from Brett Bull, the man who delights in bringing odd, interesting and often naughty news from Japan to us Westerners via his website The Tokyo Reporter. Bull has posted a story about the 5th Annual Sky PerfecTV! Adult Broadcasting Awards that took place in Shibuya, Tokyo recently and its big winner Kirara Asuka (above) who was crowned Best AV Actress of 2009. The 20-year-old, who's fast becoming Japan's AV Queen, expressed delight at her win, but she wasn't the only girl who went home with a trophy. Haruka Ito took home Best New AV Actress, Chisato Shoda picked up the award for Most Appearances, 33-year-old Emiko Koike won for Best Mature Actress, and Momo Kaede took home the Best Program award for her “Nude Sign Language News” aired on Japanese adult cable station Paradise TV. Along with handing out awards the night included a series of AV actress skill testing events (I know, I know.... Wait for it): an erotic reading competition, a game of charades in which contestants had to identify things like lube and condoms, and an "air sex" competition in which actresses had to simulate... well, doing something to a microphone. I think you get the idea.

Some of you may be wondering why I'd be giving space to this kind of story, but you only need to look at the numbers to see why: last year over 3,000 adult films were made in Japan compared to the 418 mainstream features accounted for by The Motion Picture Producers Association of Japan. It's that old example of if aliens came down from outer space they would say that Earth's dominant life form was insects just due to the numbers. Makes you wonder where the real money and power lies in the Japanese film industry.

You can check out pics from the Sky PerfecTV! Adult Broadcasting Awards at The Tokyo Reporter here, and don't worry, they're work safe (but don't be disappointed either...)
Posted by Chris MaGee at 5:12 AM