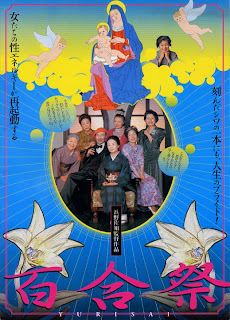 With the release of Jasper Sharp's monumental history of Japanese sex cinema "Behind the Pink Curtain" being released by FAB Press last year and the founding of Los Angeles-based DVD distributor Pink Eiga, the world of pinku eiga and Nikkatsu roman porno has seen a huge surge in interest here in North America and in Europe recently. It also doesn't hurt that this year's Oscar-winning Best Foreign Language Film "Departures" was directed by former pink filmmaker Yojiro Takita, the same man who helmed the hugely successful "Chikan densha" or "Groper Train" series during the the 1980's.While I recently had the pleasure of chatting with Takita about his career he made a special point to stress that pinku eiga are not like North American or European sex films. Those are more concerned with the plumbing of sex whereas Takita stressed that pinku eiga are concerned with expressing eroticism. There's just not that same shame attached to sex in Japan as there is here in Judeo-Christion North America it seems, but for all of the enthusiasm for sex films from Japan recently there is still the question of where do women fit into the picture. Well, most of the time they're in the picture with their clothes off, but what I mean is where is the female perspective in the world of pinku eiga? Is the genre all female objectification, voyeurism and the "male gaze" as coined by film theorist and critic Laura Mulvey. Well, if you're looking for women in pinku eiga working behind the caera the most important figure would have to be Sachi Hamano.

Hamano, born in 1948, got her start in the ground zero of the world of pinku eiga working for legendary filmmaker Koji Wakamatsu at his Wakamatsu Productions in the late 1960's. Hamano never felt comfortable at Wakamatsu Pro though, nor in the male-dominated world of pink films and felt it necessary to shorten her given name Sachiko to Sachi be accepted by the boy's club behind the camera (she even went so far as to use a pseudonym, Chise Matoba, on a number of her productions). From the early 1970's she set out on her own, making pink films from a woman's perspective and she's still going strong (very strong) to this day. Last count Hamano had directed over 400 films both pink films and mainstream films. Hamano made the shift to the mainstream after losing out to actress/ director Kinuyo Tanaka, the first female feature filmmaker in Japanese film history, for the coveted title of Japan's Best Female Director at the 1997 Tokyo International Women’s Film Festival. One of her more recent mainstream efforts, although still steeped in female sexuality, "The Lily Festival" was screened recently in London at the 17th annual Raindance Film Festival, programmed by "Behind the Pink Curtain" author Jasper Sharp.

"The Lily Festival" is set in a complex of suburban apartments for seniors. As the film starts we're witness to the discovery of a Mrs. Totsuka-san, a resident in the complex in her early 80s who's died in her apartment. She's found by 73-year-old Miyano-san (played by screen veteran Kazuko Yoshiyuki), a neighbour who obviously held very deep and very dear feelings for her friend. It's Totsuka's death that at first darkens the beginning of the film, but then quickly injects an aspect of magical realism. Time passes, Miyano-san slowly recovers from the loss of her close friend, and a new tenant moves into the complex, a pony-tailed and beret-wearing gentleman named Miyoshi. His arrival is met with excitement, and a rediscovered sexual desire, by the entirely female occupancy and Hamano has the late Totsuka-san witness the entire curfuffle from on high, having actress Sachiko Meguro narrate the film while the camera is often positioned, like an out of body experience, above the action. 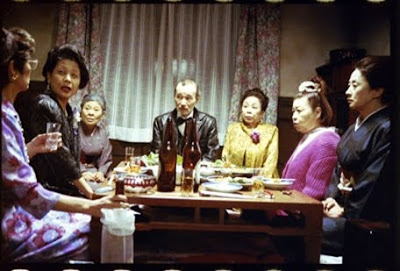 While Hamano's narrative technique is out of body, what the residents of the building go through is entirely within the body. As Miyoshi, who is brought to life by another screen veteran, Mickey Curtis (Fires on the Plain, Wild Life, Kamikaze Taxi), settles into his new surroundings he begins to charm and seduce the women, first Miyano, then her 70-year-old friend and former bar owner Yokota-san (Kazuko Shirakawa), then Namiki-san (Chisako Hara), also 70-years-old. Even 91-year-old cat owner Kitagawa-san (Hisako Ôkata) gets herself fired up about this new man in their midst. Even though Miyano-san immediately gets the feeling that the women are dancing around Miyoshi as if they were the Seven Dwarves and he was Snow White, which Hamano depicts literally in a recurring and hilarious daydream sequence, it doesn't stop her from slowly falling for this old Don Juan who's old flaccid penis she lovingly equates with the soft pads of a cat's paw. Of course all the two-timing (and three-timing... and four-timing) by Miyoshi complicates the situation, but when has a story about boring old monogamy been that interesting?

I came away from "The Lily Festival" charmed, but also reminded of quite a few other films, which I'm not sure is a good thing or a bad thing. While it was released in 2001 Hamano's film has the look and feel of a classic early 80's Art Theater Guild film like Yoshimitsu Morita's "The Family Game" or Juzo Itami's "The Funeral". The production value is kind of low tech and the actors voices are sometimes awkwardly dubbed in, but again, this effect is much more charming than it is off-putting. I also came away from "The Lily Festival" feeling that it had strong links to Kaneto Shindo's 1995 comedy/ drama "A Last Note". That film, which starred Shindo's late wife Nobuko Otowa as well as many other veteran film actresses like Horuko Sugimura, focused (although not exclusively) on the experience of elderly women as they try and reconcile their youthful spirits with their failing bodies. I firmly believe that "A Last Note" is a near masterpiece, so to have it immediately come to mind, not just due to subject matter, but also to mood and execution, when watching "The Lily Festival is obviously an indicator of the quality of Hamano's film.

I think what truly sets "The Lily Festival" apart as a really special film is that it doesn't shy away from the experience of sexuality during the latter years of these women's lives. We've seen a push towards showcasing stories of this kind in recent years with films like Australian filmmaker Paul Cox's 2000 film "Innocence" and German filmmaker Andreas Dresen's much more recent (2008) and much more explicit film "Cloud 9". Even for the latter's outstripping of Hamano in territory that is much more in keeping with the bulk of her career I think her "Lily Festival" is one of, if not the most successful, of this trio of senior sexuality films. Miyano-san and her friends and fellow tenants never feel conflicted about their sexual feelings. Maybe a bit pleasantly surprised, but never conflicted. These are adults after all. In today's society we often make the mistake of infantilizing the elderly, socially neutering them even though in many cases they feel as young inside as they did when they were 30, 40, or 50 and still sexually "juicy" (if you'll excuse the phrase). Hamano doesn't forget that in her film, and what's more she depicts sexuality at this point in life as being not only rooted in physical desire, but affection, love, a kind of connoisseurship of experience. In the end we see that sexuality for Miyano and her friends is a much more fluid thing, which I think is an important thing to be stated.

"The Lily Festival" is an entertaining, insightful, and (here's that word again) charming piece of filmmaking. Here's hoping that it's recent screening at Raindance gives it a whole new Western Audience 8-years after its initial release.
Posted by Chris MaGee at 6:10 PM