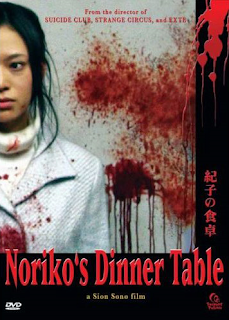 "Are you connected to yourself?" "Only being close to death can make you appreciate living." "We all just want to avoid pain."

Heady stuff. If you were wondering whether Sion Sono's horror sequel to his earlier 2001 "Suicide Club" was going to find some dark corners to explore, it does. However, it isn't really a horror film. Nor is it a sequel. It deals with some horrific concepts, actions and even images (in particular, it revisits the mass suicide of young school girls on a subway platform from the previous film and gives additional context to it), but it doesn't work on providing immediate scares. Since this is a very talkative movie (both in character conversation as well as with ever-present narration), it leaves you with concepts, ideas and emotions that will bounce around in your head for awhile. It's when they pop out that you need to be worried.

The timeline of "Noriko's Dinner Table" begins before "Suicide Club" and seems to span completely across that film only occasionally touching portions of it (e.g. the mass suicide, the web site haikyo.com), so it's by no means a typical "sequel". Looking at the film in any conventional sense is somewhat of a meaningless task anyway - through its four main characters (each given their own chapter), the film explores the nature of self, losing one's innocence, the trappings of family / societal expectations and the purpose of living. Sounds a bit like a dry, third year university essay, doesn't it? Not at all...Sono, as he seems to always do, manages to pull you along effortlessly from one scene to the next, always dangling the possibility that something is right around the corner. Through the abundance of music (similar themes repeated again and again) and all four central characters getting their own turns at narration, there is a constant sense of brittle tension. With the movie at a long 160 minutes, the technique keeps you engaged and alert. 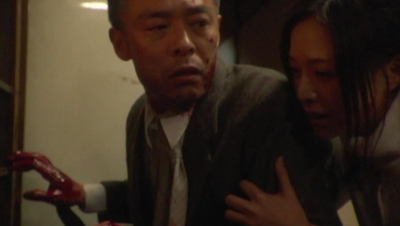 That's important because it doesn't spoon feed the viewer it's plot or its ideas. Things begin, appropriately enough, at a dinner table. 17 year old Noriko, her younger sister Yuka (probably only about a year younger) and her parents are passively eating their end of day meal like most other families. Actually, Noriko is just picking at her food since she's sulking. Her father insists she go to a local community college and not to the big city of Tokyo for further education. He feels that bad things happen in the big city (ie. boys) and that Noriko can get everything she needs from their small township - just like he does via his small town newspaper reporter job. Feeling rebellious, Noriko leads a cause at school to get more access to computers. This increased access allows her to find the haikyo.com web site where she becomes very involved in discussions with like minded girls. This spurs her to run away to Tokyo and meet up with her new friends. The leader of the group - and architect of the subway mass suicide - is Kumiko who goes by the screen name of "Ueno Station #54" (a reference to the train station locker where she was left as a baby and claims was actually her birthplace). She runs a "family rental" business that provides paying customers actors to fill any particular role they want - usually roles that have been vacated by a previous family member leaving.

As the chapters unfold (the story actually spans several years), Yuka also runs away from home to join the group and their father investigates and finally makes his way to Kumiko. The overall guidance that she provides her followers seems to be that you need to lose yourself before you can find yourself. Though Noriko claims she finally becomes the person she always wanted to be after joining the family rental service, the conversations they have in their "roles" are incredibly mundane - they aren't actually living now that they've become cyphers for other people's needs. It's within this deep loneliness that they are supposed to truly discover themselves and really become connected. Either that, or they commit suicide - sometimes as part of a "grander plan". It's a rich, dense and difficult world that Sono has created - one that ties the Suicide Club (also known as the Suicide Circle) into the circle of life. If the entire affair drags a bit towards the end, it certainly pays off emotionally (the excellent performances by all are a big reason for this too). Sono essentially bookends the film with another dinner table sequence, but you can decide whether or not the characters have come full circle themselves.

Read more from Bob Turnbull at his blog.
Posted by Chris MaGee at 4:30 PM