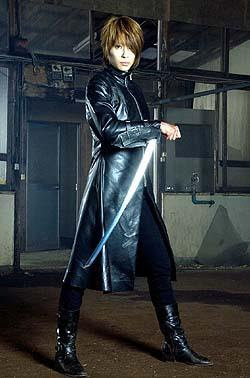 Back at the beginning of my we ran the story about the new Takanori Tsujimoto action movie titled “Hard Revenge Milly”. Starring Miki Mizuno as the titular heroine it follows a tale of revenge set in a near future Yokohama where all gun control laws have been abolished and bloodthirsty gangs rule the streets.

Now, Nippon Cinema has got the scoop that “Milly” which will only clock in at a speedy 44 minutes will be part of what’s being called the “Neo Action Double Bill”. Nippan, the distributor for the project, has buddied Tsujimoto’s film with Isao Kaneko’s “The Masked Girl” about a super strong, genetically altered high school girl who has to go up against a pair of evil geniuses, The Joker (no, not that Joker) and The Black Maria.

It looks like fans of “The Machine Girl” will be peeing their pants in delight because the trailer that Nippon Cinema has scored is chock full of ultra-violence… but what’s with the prosthetic machine gun leg on Milly? Geez, between “The Machine Girl” and this Robert Rodriguez is getting utterly and thoroughly ripped off. What? What did you say? Litigation?
Posted by Chris MaGee at 6:24 AM

i thought of the leg-gun thing too.. i paused and it's actually just her holding the gun with her hand under her coat for trickery's sake.

Well, thank god for that! How many machine gun limbs can you have?!