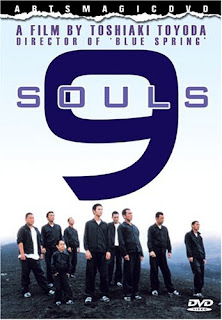 I’ve got to admit right off the bat that I wasn't that impressed with Toshiaki Toyoda’s "9 Souls" (2003) after I popped it into the DVD player for the first time. The follow-up to Toyoda's bloody 2001 juvenile delinqent film "Blue Spring" it started like any of the dozens of hip, Quentin Tarantino-esque movies that hit the market in the past decade complete with quirky art housed dialogue contrasted with crude humour, a riff-heavy soundtrack and imagery cribbed from old B-movies, in this case the escape of the prisoners through a barren wasteland from "Female Convict Scorpion: Jailhouse 41".
The story starts out with hikikomori Michiru (Ryuhei Matsuda), an unkempt young man who's been cloistered away in his room for years who finally ventures out to break up a fight between his younger brother and his father. He does this by brutally killing his dad, a crime that lands him in jail. There he's billeted in a cell with nine other convicts: a gang member, a mad bomber, a drug dealer, a porn king, an ex-yakuza, an escape artist, a burly loose cannon, a man who killed his own son, and a counterfeiter. Mr. Yamamoto (Jun Kunimura), the self-dubbed "King of the Counterfeiters" is only on screen for a few minutes, cracking under the pressure of prison life shortly after Michiru arrives, but before he's carted off kicking and screaming by the guards he tells his cellmates about a cache of money buried in a schoolyard at the foot of Mount Fuji. Could it be true? Millions of yen just waiting on the outside? Soon the remaining nine prisoners will find out when dwarf Shiratori (Mame Yamada), the escape artist, miraculously discovers a hole in the floor (one they've never noticed before?) of their cell which leads the group to freedom. All of this happens within the first 15 minutes of the film after which we watch as the nine souls of the title organize themselves to search out Yamamoto's stash of yen. I was a bit surprised that Michiru's character drifted into the background and Torakichi (Yoshio Harada) came to the fore as the defacto leader of the group, but I still didn't know who he or the other prisoners were except for what crime they committed. I wondered whether I should keep watching and in the end I did. That was 100% the right decision. 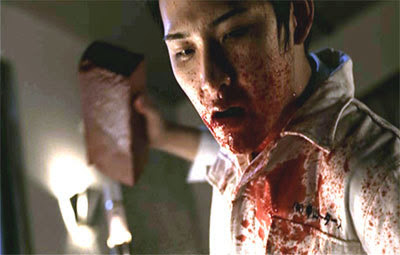 The journey to uncover the buried treasure is loaded with dark humour, from a little implied inter-species love between the horny prisoners and a flock of sheep to everyone dressing in drag to get a good lunch, and with each laugh I found myself warming more and more to this motely group of escaped cons. Toyoda slowly begins to build up the relationships and rivalries between the characters; a unique understanding that Shiatori and the mad bomber come to, the volatile rivalry that develops between Michiru and the gruff Torakichi, so that when the anti-climax of discovering what's really buried in the schoolyard I felt as deflated as the convicts.
It's shortly after this disappointment that the group of nine starts to break up, and it was at this point in the film that everything did a 180, and I realized that Toyoda got us laughing with the characters in the first half so that we find ourselves emotionally invested in the tragic second half. Although he sights "The Great Escape" as an inspiration, Toyoda was obviously never concerned with the mechanics of the escape, but what happens to the convicts once they’re back on the street. Each heads out under the cloud of being captured by the police and start tying up unfinished business, trying to right the mistakes that led them to prison. "9 Souls" may start like a hip indie comedy, but it quickly shows it's real colours. It’s a story of redemption, clumsy and often bloody attempts at it, sure, but true and heartfelt redemption nonetheless.
I don’t want to give too much of the second half of the film away because the final unfolding of each of the characters is a wonderful thing to behold. Start the debates now, but I would hazard to say that I haven’t seen a Japanese film that handles an ensemble cast this well since "Seven Samurai". I absolutely love "9 Souls" and I think you will to.
Posted by Chris MaGee at 1:39 PM

Didn't Toyoda get busted for a tiny bit of weed or something and is now having trouble getting films made? A director this young and talented simply has to have the opportunity to make more films.

Chris, you've made me want to see the film again...As I had mentioned previously, the film didn't grab me much on my first viewing a couple of years ago. But you've got me curious again!

Hmmm, now if there were only some way that I could see this with a group of people on a reasonably sized screen...

Dave, he got busted for possession of "stimulants" (see: speed) back in 2005 and it's true, he hasn't been able to get anything made since. Last I heard he was doing light and video shows for a rock band in Japan. What a damn, damn shame...

Sucks. Hope he gets another chance. That rock band got one overqualified concert director, though.

How's Hanging Garden? I'm thinking of buying that, but there haven't been a lot of reviews for it.

Actually, Dave, I haven't seen "Hanging Garden" which really eats me up. I've heard from a friend who saw it in Japan that it's probably his best film, but so far no one has snagged for release here in North America. Grrr!!!

While I'm flipping through stuff on this sight I remembered these posts about Hanging Garden I posted a while back. I found this in a Little Tokyo(LA) rental place with English subs and its something else. There are some cinematic ideas in this film I've never seen before, like near the beginning where a sequence with a dreamlike swinging camera was used. Lots of visual surrealistic touches are used throughout, somewhat like Chan Wook Park's films. Its not perfect- it actually would've benefited from being longer, and the ending is too optimistic for this one(although it might not have been real), but this deserves some recognition on the internets.