Production on "Oppai Bare (Boobs Volleyball)" under way in Fukuoka 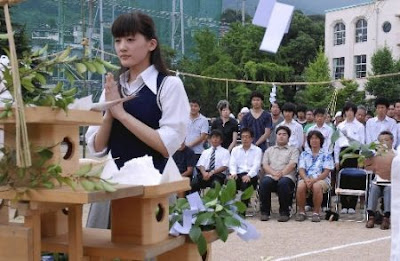 Regular readers of the Pow-Wow blog will remember our report on Haruka Ayase's upcoming film "Oppai Bare". The title, which roughly translates as "Boobs Volleyball", is also the name of the successful novel by Noboru Mizuno on which the film is based. It tells the story of a young teacher who in 1979 motivates a high school volleyball team on a losing streak by promising that if they get their act together and win the next big game that... wait for it... that she'll flash her ample cleavage for them.

Well, production on "Oppai Bare" has been underway in the city of Kitakyushu in the north of Fukuoka Prefecture since the end of July and it's from there that the image above is taken. Lead actress and former gravure idol Haruka Sayase, last seen as the female incarnation of Zatoichi the Blind Swordsman in Fumihiko Sori's "Ichi", prays at a local Shinto shrine for a safe and successful shoot. Also, behind the scenes footage from the set was featured on Japanese TV and shows Ayase putting her young team through the motions.. but surprisingly everything looks pretty tame. Maybe the film won't end up being as embarrassing as it initially sounded.

Although there's not much there yet you can check out the official website for "Oppai Bare (Boobs Volleyball)" here. Thanks to Kyushu Yomiuri for the photo.