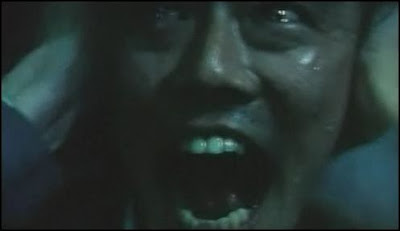 Foreign film fans have already been hit this year by the closing of both Tartan UK and Tartan USA, but it looks like we won't get out of 2008 without a little more grief. Sad news from Marc Walkow and Outcast Cinema today about the closure of another DVD distributor, BCI Eclipse. The distributor, a subsidiary of Navarre Corporation, had recently released Joji Iida's "Battle Heater" and Sabu's "Unlucky Monkey" (above) and Walkow was working with them on upcoming Region 1 DVD releases of Takeshi Kitano's "Violent Cop", "Boiling Point" and "A Scene at the Sea" and Hiroshi Teshigahara's "Rikyu" and "Basara: The Princess Goh", but now those have obviously fallen through.

Navarre Corporation cites "continued unprofitability from the label, as well as general economic conditions during the recession" as the reason for the shutdown which may make sense, but it doesn't ease the sting any less. I guess it's time to pick up any BCI Eclipse DVDs while you still can.
Posted by Chris MaGee at 2:53 PM