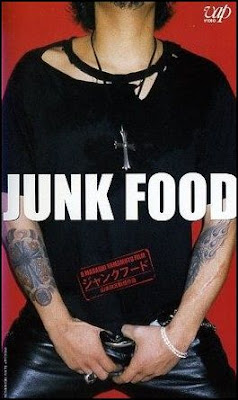 When it comes right down to it, all big cities are essentially the same. Sure, there are superficial differences, much of them cultural, but once you get past that and explore the core of the modern urban sprawl and what lies beneath its surface, it all becomes universal. The only thing that really does differ is our perception of them, and this perception is often generated through various forms of media, whether it's the news, TV or film. With "Janku Fudo" aka "Junk Food", director Masashi Yamamoto attempts to alter our perception of Tokyo ’s underbelly. Instead of the often depicted yakuza world, we see the world of the outsider, the person who is rejected or chooses to reject common society.

Yamamoto depicts this cross section of Tokyo culture by using the wonderful format of the omnibus film, giving us small snippets of one day in each of the outcast’s life. The three sections are visually different and uniquely distinct narratively, but thanks to the way in which Yamamoto sets it up and pieces it together, it still forms a cohesive whole.

The first section, shot on video, book ends the film and provides the through line. It features a blind elderly woman (played by Yamamoto’s own mother) as she wakes up and runs through her daily regiment of eating, praying and shopping. The second section, shot on film, stars Iijima Miyuki as Miyuki, a junkie salary woman who starts off by suffocating a man after she ties him to a bed. Then she hunts down her daily fix before jaunting over to the office for the daily grind. The final and longest section of the film is shot in a variety of digital video formats and follows the lives of Chinese-American prostitute Myan and her ride Hide who is traveling with his friends ashes (which becomes an important narrative link between all the characters), a group of street hoodlums who drive Western low rider cars, a Pakistani illegal alien and a female South American wrestler looking to return home.

Alone, these sections wouldn’t work, but together, they form a unique cinematic organism. Yamamoto presents no back-story for any character, and very little motivation for their actions, at least initially. Some commit acts of murder, others lie, cheat and steal. But because of the way they are set-up, Yamamoto never judges any of the characters, nor does he allow the audience to judge them. There’s no sob story about why these characters behave the way they do, the film doesn’t tell you what to think, but instead allows you to draw your own conclusions about the characters that occupy the world of "Junk Food".

Yamamoto wanted to get back to his independent roots with this film, and he most certainly does, presenting us not only a refreshing take on the unseen world of the most populated city on earth, but he presents it in such an original manner that you can’t help but become enthralled.

Read more by Matthew Hardstaff at his blog.
Posted by Chris MaGee at 3:04 PM