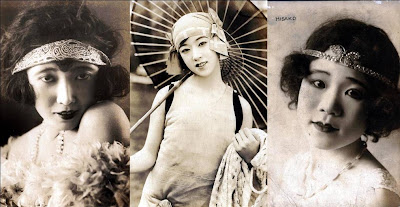 Throughout it's history Japanese cinema has featured the work of some very talented women, from golden age actresses like Kinuyo Tanaka, Setsuko Hara and Machiko Kyo to present day stars like Kyoko Koizumi, Tae Kimura and Rinko Kikuchi to name only a few, but like I mentioned in our Top Ten Films That Changed Japanese Cinema during the first couple of decades of the 20th century women had a very hard time finding a place in the world of Japanese film. The very first Japanese film actress Tokuko Nagai Takagi (1891-1919) had to appear in films produced in the United States partly due to the fact that women were forbidden from appearing on Japanese movie screens. Following the dictates of noh and kabuki male actors called oyama were responsible for performing women's roles, but the prohibition of women in film didn't just apply to those onscreen. While there was never a ban on women attending movie houses during the early 20th century there was a law that kept theatres segregated with women forced to sit in a separate section to prevent anything other than viewing of the film in the darkened halls.

In 1921 and the appearance of 20-year-old actress Haruko Sawamura in Minoru Murata's deliberately modern and Westernized film "Souls on the Road" changed the Japanese film industry and suddenly a whole generation of young women found themselves transformed into the country's first starlets. Nosing around online I tracked down a fantastic Japanese language site here that features beautiful vintage photographs of these very first Japanese actresses and it's interesting to note that some of them rivaled today's spoiled and scandalous stars.

From right to left above we have Aiko Takashima (1904- ?) whose very small filmography, including Kenji Mizoguchi's 1925 "Gakuso o idete (Out of College)", was overshadowed not only by her beauty, but her flakey behaviour. The most famous example of this was how she burnt her own house down one winter after putting hot coals from the brazier into her woolen stocking to keep warm. Sadly she would end up being one of many Tokyoites who "disappeared" during the bombing of the city by the Allies during WW2.

Yukiko Tsukuba (1906- 1977) seems like she would be able to go toe to toe with Brittney Spears or Lindsay Lohan. The star of over 10 films, including those of Yasujiro Shimazu and Mikio Naruse was a notoriously heavy drinker whose career was nearly derailed by a nude photo scandal. By the late 1930s she left acting and became a geisha.

It wasn't just all lurid headlines and bad behaviour though. Hisako Ichizo (1904-1921) was a singer and actress from the Asakusa theatre district of Tokyo who was poised for screen success, but died tragically at the young age of 17. The cause? Lead poisoning from the heavy cake make-up that she wore to give her her famous porcelain doll look.

There are more wonderfully evocative pictures of these early actresses to brows through even if you don't read or speak Japanese, so if you're interested in the roots of Japanese cinema make it a point to take a look. Thanks to TokyoTimes.org for additional info on these ladies.
Posted by Chris MaGee at 2:07 PM