JAPANESE CINEMA BLOGATHON: My favorite "what if" scenario...

Even though I got taken out for most of this week with a flu/ bug I'm glad I can weigh in with at least a couple of entrees into the Wildgrounds Japanese Cinema Blogathon that has over 20 J-Film websites buzzing with great info and insight. Laying in bed last night I got a flash of inspiration as to what my second contribution to this flood of posts would be, and before I even start I want to thank Michael at Wildgrounds again for setting this blogathon up because without it I wouldn't have the forum to go on about my long cherished "what if" scenario: What if Shohei Imamura had directed an adaptation of Haruki Murakami's "The Wind-Up Bird Chronicles"? 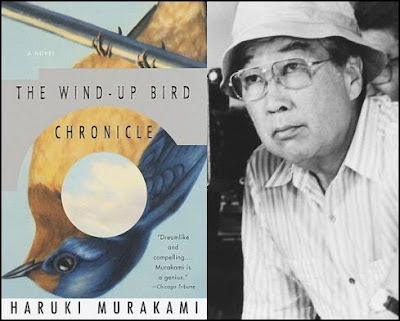 See? This isn't news, and it's not even a rant... more just wishful thinking and a bit of residual sadness about the passing of Shohei Imamura three years ago. It was a huge loss to the world of cinema when Imamura, the director of such classics as "The Insect Woman", Intentions of Murder", and "The Ballad of Narayama" passed away at the age of 79, but for me his passing brought to an end a long held wish: that Imamura would one day adapt one of if not my favorite Murakami work, "Wind-Up Bird", to the screen. Other directors have tackled Murakami's short works, most notably Jun Ichikawa with his 2004 film "Tony Takitani", but I personally felt that the oft-mentioned chaotic/ intuitive narratives and eccentric characterizations that critics have long associated with Imamura's films would have been the perfect fit for Murakami's sprawling, sometimes chaotic, and more often than not surreal novel which basically starts as a search for a lost cat and ends up exploring sexual desire, the healing power of water, Japan's cult of media personality, psychic prostitution, the spirit world, and the Japanese occupation of Manchuria. If you're a Murakami fan you'll know what I mean, and you may have already seen the Murakami-esque parallels in Imamura's films like "The Eel" or his final film "Warm Water Under a Red Bridge". Meanwhile for all of you who haven't read "The Wind-Up Bird Chronicles" and are asking "A lost cat story... about Manchuria???" then get out there, do yourself a huge favor and read the book.

This imaginary adaptation (and I have to stress imaginary - this project never existed and will sadly never exist) would have been the meeting of two of Japan's greatest creative geniuses, and it may have also been another collaboration between father and son. While I would hope that had such a project ever taken place that Murakami himself would have assisted in writing the screenplay, it would also be nice to think that Imamura's son, Daisuke Tengan, who wrote the screenplays for both "The Eel" and "Warm Water" as well as being a director in his own right, would have helped bring this project to the screen. The real fun for me comes from who would have been cast, or who would I like to have seen cast in this screen adaptation? Indulge me for a bit longer and I'll tell you: 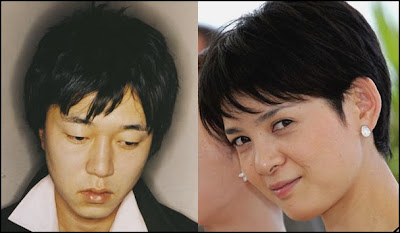 Toru Okada: Murakami's passive, recently unemployed, nearly 30-year-old lead character needs a young actor who is capable of tackling a wide - a very wide - range of emotions and situations. One actor who I think possesses these qualities, and whose face I often thought of while re-reading the novel is Hirofumi Arai (above left). The 30-year-old actor best known for his roles in Toshiaki Toyoda's "Blue Spring" and Tatsushi Omori's "The Whispering of the Gods" has definitely got the chops to go from clueless slacker to psychic explorer, both things he'd have to face had he been cast to portray Okada.

Kumiko Okada: So who would I like to have seen portray Okada's wife Kumiko in this fictional screen adaptation? For me that would have to be Fusako Urabe (above right). Not well known, but powerfully talented Urabe is a favorite of festival darling Masahiro Kobayashi who has cast her in his 2001 film "Man Walking on Snow" opposite the legendary Ken Ogata and 2005's "Bashing" in which she blew festival audiences away as a woman who is shunned by Japanese society after she has been held hostage in Iraq. 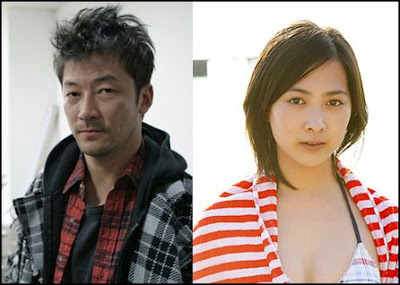 Noboru Wataya: The ever present Noboru Wataya: author, intellectual, panel show host, Kumiko's brother and the closest thing that "The Wind-Up Bird Chronicle" comes to an all out villain needs an actor with amazing charisma and a certain bigger than life persona, so for this role I'd nominate Tadanobu Asano (above left) whose quirky edge would bring an added dimension to this handsome but ultimately disturbed character.

May Kasahara: Although most people would cast to type for the Lolita-like character of May Kasahara, Okada's teenage neighbour with an obsession with death and balding men I would have liked to see a young actress who's maybe not all curves and cuteness, but who's impressed me for years in this crucial supporting role. Mitsuki Tanimura (above right) wowed critics with her debut performance in Akihito Shiota's 2005 film "Canary". Tanimura brought amazing vulnerability and screen presence to her portrayal of a wise beyond her years teen who befriends a boy raised in an Aum Shinrikyo-style cult, skills she would need again to portray another precocious teen. 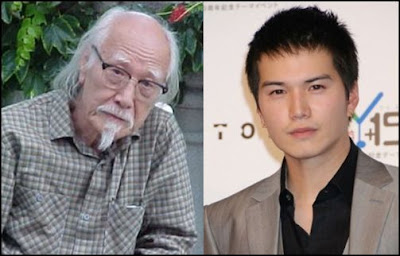 Lieutenant Mamiya: Another small but pivotal supporting character who makes an appearance in "The Wind-Up Bird Chronicle" is the elderly fortune teller and veteran of the Manchurian occupation Lieutenant Mamiya. There's no one that I think could have brought more to this character better than another legendary filmmaker, Seijun Suzuki, the man behind "Branded to Kill" and "Pistol Opera" (above left). Granted his story is told in flashback in the novel, so Mamiya would require two actors to portray him, so my vote for the young Mamiya would have to be Hayato Ichihara (above right), if only for the strength of his performance in Shunji Iwai's "All About Lily Chou-Chou". 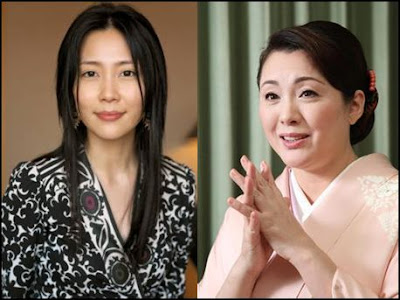 Malta Kano/ Creta Kano: The psychic sisters from the Mediterranean who assist Okada in his odyssey should by rights be played by two actresses, but I would cheat and cast Yoshino Kimura (above left), star of such films as Takashi Miike's "Sukiyaki Western Django" and Yosuke Fujita's "Fine, Totally Fine" in a bit of dual-role stunt casting, because a) she's got the talent, and b) she possesses the physical beauty that the role(s) would require.

Nutmeg Akasaka: Okada's rich benefactress and admirer of his unique/ mysterious birthmark, Nutmeg Akasaka, for me would require an actress with both beauty and years, and there's only one actress that I can think of that has both and who needs to be rescued from the "mother" roles she's been relegated to as of late and that would be Keiko Matsuzaka (above right).

So, that's a lot of ink (or pixels) for a film adaptation that will never take place, but like I said, this Japanese Cinema Blogathon is the perfect venue for this kind of wild "what if" speculation, and basing all this speculation on a film that I think would best be served to have the late Shohei Imamura at its helm is about as wild as you can get. That being said I did mention that Imamura's son and screenwriting collaborator, Daisuke Tengan, is an accomplished filmmaker in his own right. His 2008 film "The Most Beautiful Night in the World" was just as eccentric as his father's later films and dealt with some of the same subject matter, ie: the fine line between polite society and our darker often sexual instincts, so could he perhaps make my long held pipe dream a reality? Only if someone reads this article and thinks it's a bankable idea. Stranger things have happened....
Posted by Chris MaGee at 4:12 PM

Wow Chris, what a great post! Imamura and Murakami alone is a pretty juicy (to use one of Imamura's own favorite words) combination, but Imamura doing "Wind-Up Bird" is actually quite perfect. Plus, you may very well have inspired me to revisit the book sometime this summer...

Thanks, Marc! I've inspired myself to watch my copy of "The Eel" again :)

A fascinating idea... my "what if" would be "What if someone had had the foresight to preserve all of Japan's pre-war films in a fireproof, bombproof bunker so that we could still see them today." Donald Richie estimates that 90% of films made before 1945 in Japan have been lost due to earthquakes, bombing, fires, self-combustion (damn that silver nitrate stock!) or just plain neglect. This includes films by Ozu and other greats. I aways find it such a tragedy when I see stills of a pre-war film and learn that it did not survive to the present day.

Not bad. If this becomes true, I'll line up to see the movie :).

This is so interesting. The actors do look good for the respective characters. I hope they make it into a movie.

Well, first i really liked your blog, and the "what if" idea is just right for me and my idle hours(for now),and i liked your cast, though the woman for nutmeg akasaka? idk well i always depicted her as a slender 40 something woman with(specifically) highly accentuated cheekbones...(and thin lips) For the others,hands down, great selection! that Creta Kano one-delightful match!