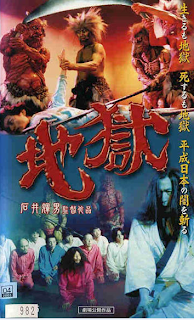 I think one of the best observations about comedy that has ever been uttered was Carol Burnett's quote "Comedy is tragedy plus time." I actually thought about this as I sat and watched Teruo Ishii's low-budget 1999 film "Jigoku: Japanese Hell" (not to be confused with Nobuo Nakagawa's 1960 horror film of the same name). Not that Ishii's film is a comedy, but with its bargain basement special effects and laughably bad acting this journey from the land of living sinners to their eternal punishment in hell is certainly unintentionally funny. Actually let me clarify that - unintentionally funny the film is, but in an uncomfortable, squirm in your seat, "I don't know if I feel right about laughing at this" kind of way. Considering that this is a Teruo Ishii film you can expect this reaction. This is the man who, after he made Ken Takakura a superstar with the "Abashiri Prison" films in the mid-60's, went on to helm the notorious "Shogun's Joys of Torture", the yakuza-meets-horror excess of "Blind Woman's Curse" and the sequel to Norifumi Suzuki's 1973 exploitation classic "Sex and Fury" that topped the original with even more boobs, butts and bloodletting. Still "Jigoku" hits new lows (or highs) of bad taste in Ishii's filmography... but I'm getting ahead of myself. Let me explain why this Carol Burnett quote is just so appropriate for "Jigoku: Japanese Hell".

"Jigoku" is a literal road map of hell. Made in 1999 Ishii hold up his own fun house mirror to show us some of the most frightful events of the proceeding decade. Rika (pinku eiga actress Kinako Sato) is a former member of the Space Cult, the name swapped out by Ishii for the Aum Shinrikyo cult that released sarin gas in the Tokyo subway system in 1995. Without any back story or explanation one day Rika finds herself confronted by an elderly woman who asks her if she would like her to show Rika the underworld. Rika enthusiastically says yes and only minutes after the opening credit sequence we're tumbling down into hell. It turns out that this elderly woman is in fact Enma (played by actress, singer, and former pin-up idol Michiko Maeda), the goddess of death who passes judgment on those relegated to eternal punishment in hell and she's giving Rika a front row seat to this theatre of cruelty so that...? That's a good question. Why exactly? And who are these unfortunate damned souls that Rika will be observing? It turns out that Ishii peoples hell not only with Rika's former Space Cult members and their leader Kyoso (Yoichi Wada), but a terrifying child killer based directly on Tsutomu Miyazaki, the Otaku Murderer who killed four young girls in Saitama in the late 80's. 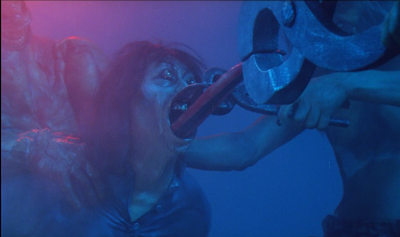 "Jigoku" is a synthesis of so many of Ishii's exploitation films up to that point. It's as if he's mixed "Shogun's Joys of Torture", "Blind Woman's Curse" and "Female Yakuza Tale" into one big infernal mess complete with psychedelic light shows, a colourful and cruel gang of demons bent on some very gory retribution, and more than enough opportunity to take female sinners and strip them down to get their tits out. For fans of Ishii's previous work "Jigoku" will be a real treat, albeit a very low rent version of his previous glories at Toei Studios. At this point in his career Ishii was working totally independently on absolute shoestring budgets, so the painfully bad special effects, set design, and acting provide a comic counterpoint to all of the severed limbs, rape, and implied child murder. There are many out there who'll take "Jigoku" as an opportunity to spend a night laughing out loud at a bad B-movie, but considering that in 1999 Tsutomu Miyazaki was still sitting on death row (his sentence wouldn't be carried out until the summer of 2008) and the masterminds behind the Aum Shinrikyo gas attacks were still on trial you have to ask if enough time had past to laugh at there horrible events... and that brings us back to Carol Burnett's definition of comedy.

You can take Ishii's film in two ways. At best Ishii, who also wrote the screenplay for "Jigoku", used his film to vent his anger at Miyazaki and Shoko Asahara and his followers and act as his own judge and jury, sentencing his fictitious representations of them to punishments that fit their atrocious crimes. He also makes takes them down a few pegs by representing them as buffoons, especially Asahara whose alter ego in the film is represented at one point with his long wig eschew, clutching piles of cash and his pants having been pissed at the fear of being arrested. At its worst, though, "Jigoku" is a case of very lazy narrative. Instead of building up fictional crimes to punish Ishii used pop culture shorthand and depicted crimes everyone in Japan knew of in order to better shock, repulse and titillate his audience. So which is it? Biting social satire or callous exploitation? That decision must be left up to the viewer, but this viewer felt that in 1999, a handful of years after the true life crimes he depicts in his film took place, not enough time had passed for this kind of tongue-in-cheek treatment.
Posted by Chris MaGee at 3:36 PM