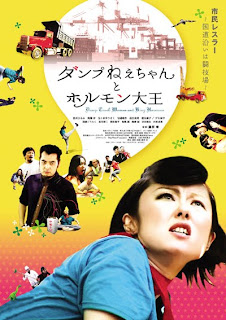 There are some films that are so bad they're good. Then there are some films that are just bad. Then there is Sho Fujiwara's "Dump Truck Woman", a film that is either terrible or a work of trashy genius. It was clear that the audience (sold out audience in fact) that I saw it with at Frankfurt's Nippon Connection were pretty split down the middle there were those busting a gut with laughter and there were people who walked out rolling their eyes. Friends I was with were part of the latter group, but something kept me in the theatre to watch "Dump Truck Woman" until the end. Masochism or fascination... but I'm getting ahead of myself.

"Dump Truck Woman" (it's full English title is "Dump Truck Woman and King of Hormones") is the work of Show Fujiwara, known in Japan as the King of Trash or Japanese John Waters, and stars actress Hiromi Miyagawa as Dump Neechan (Dump Sister), a pompadoured, half dolled up beauty who is also tougher than Akira Kobayashi, Bunta Sugawara and Hiroki Matsukata all rolled into one. She grunts, rolls her R's like a hardened yakuza thug, and sits scratching her balls (if she had balls, but...). She also does a man-sized day of hefting and delivering steaming trays of noodles from the ramen joint she works at (and that is run in the film by J-Horror screenwriter Hiroshi Takahashi). The only problem is that after a hard days work she doesn't feel the need to bathe. Combined with the fact that it's doubtful if she even wipes her ass after taking a dump and you have the reason why Dump Neechan is called just that. You were expecting a nod to those old Bunta Sugawara "Truck Yaro" films weren't you? No such luck! Yes, Fujiwara is playing with those old 1970's tough guy films with "Dump Truck Woman", but frankly he just wouldn't have the budget to get a real dump truck. 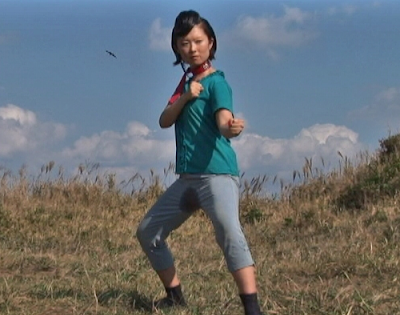 "Dump Truck Woman" is an object lesson in low-budget filmmaking. Shot on video... and no, not on crisp, colourful HD video, but "video" video.... it looks like a film you'd stumble across at 2 o'clock in the morning on public access television. Many times the video is out of focus, the sound is muddy or it's dubbed in and doesn't sync up with the actors' lips, and when special effects are used, well, lets just say that it looks like the blood and guts are a combination of Halloween props you can buy at Shoppers Drug Mart and plasticine. Oh, and there's the missile strike that utilizes the same fancy screen wipes that you see in Bollywood shows (once again) on those public access TV stations on Sunday morning. The subtitling for "Dump Truck Woman" is the cherry on top of the ice cream though. They read as if they were produced by Yahoo Babel Fish as opposed to professional translator.

All these technical nightmares seem to fit the adventures of Dump Neechan though. The storyline of the film is just as haphazard and and trashy as its execution. You see Dump Neechan, despite her butch persona, is all woman, but it takes the arrival of The King of Hormone (Demo Tanaka) to bring out the girly-girl in our heroine. The two fall in love, treat us to some raunchy sex scenes, and King of Hormone finds that special spot that makes Dump Neechan tingle, namely the kiss curl at the front of her pompadour. Gently touching that sends her into spasms of ecstasy. It's not all happy relationship fodder for these two though. It turns out that King of Hormone is a serial killer and a cannibal. We see as much after he kills Dump Neechan's best friend and carves her unborn child out of her womb and grills it up yakaori style for him and an unsuspecting Dump Neechan. Then he forces her into anal sex (complete with gushes of unsightly santorum) after which she's left for dead. It takes a surgeon and martial arts master played by author and critic Risaku Kiridoshi to rebuild Dump Neechan into a kick ass aikido warrior who can take on her rapist, King of Hormones and his goon brothers, in a final climactic battle. This battle has Dump Neechan stinking of onions and getting her period in the middle of the fight though, but this is only one of the disgustingly laugh out loud moments that make their way into the film. I did feel a little guilty about laughing at Dump Neechan farting diarrhea into the faces of the doctors sewing up her torn asshole, but damn it it was funny! I mean, how can you not laugh when the film was so expressly designed to make you do just that?

For film and culture snobs, as well as those possessing propriety and good tase "Dump Truck Woman" is one big "Fuck you!", a cross between the 70's Toei Pinky Violence that in honours/ spoofs and and punk rock D.I.Y. energy. Even if you consider yourself a connoisseur of bad movies "Dump Truck Woman" will offend you, if not for its basement level humour, then for its sheer technical ineptitude; to put it plainly this film is shoving its finger in the faces of 16mm grindhouse-loving hipsters just as much as the snobs. If you're as tough as Dump Neechan and can take it on the chin with Fujiwara's trash cinema assault then you, ladies and gentleman, are ready for "Dump Truck Woman".
Posted by Chris MaGee at 7:25 PM

Iguchi cast regulars in a Japanese John Waters revenge comedy? Color me in!