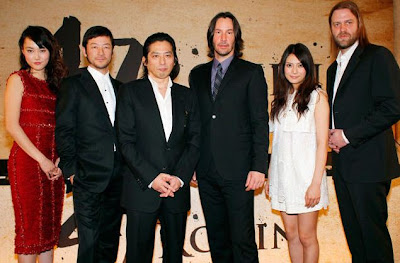 Keanu Reeves just can't keep his mitts off Japanese film. Reeves has long been rumoured to be starring in a live-action remake of Shinichiro Watanabe's "Cowboy Bebop" (read our report from 2009 here). Another rumour floating around since about the same time was that Reeves would be starring in yet another retelling of Japan's national epic, The Loyal 47 Ronin, for Universal Studios. Well, this production isn't a rumour any more.

This week Tokyograph that director Carl Erik Rinsch is set to get Keanu Reeves in front of the camera this month to begin shooting "47 Ronin", and wait for it... it'll be in 3D. Reeves will apparently not be playing one of the ronin who seek revenge for the death of their lord who was ordered to commit ritual suicide. Instead Reeves will be portraying "an outcast" named Kai who joins the vengeful samurai as they plot the death of evil lord Asano.

If the idea of Reeves starring in a 3D version of one of Japan's best-loved adventures deflates your spirits the news of who will be starring opposite him may cheer you up a bit - Hiroyuki Sanada, Tadanobu Asano, Rinko Kikuchi and Kou Shibasaki. Talk about an all-star cast, and it's nice to see Tanadnobu Asano getting cast in something better than "Thor" or a film version of the board game Battleship. Still, I wonder how much crossover appeal Reeves has since the the disappointing sequels to the groundbreaking first "Matrix" film. The choice of director is a tad odd as well as Carl Erik Rinsch's previosu credits only include short films, albeit impressive ones like "The Gift" which you can see on YouTube here. I guess we'll have to wait until November 11, 2012, the proposed release date of "47 Ronin", to see if Paramount, Reeves and Rinsch can pull this off.

Thanks to Eiga.com for the above image.
Posted by Chris MaGee at 9:13 PM

Okay I get the Japanese cast, but Keanu?

@Japanflix Dude, Keanu was Ted. Don't be messing with our national treasure!